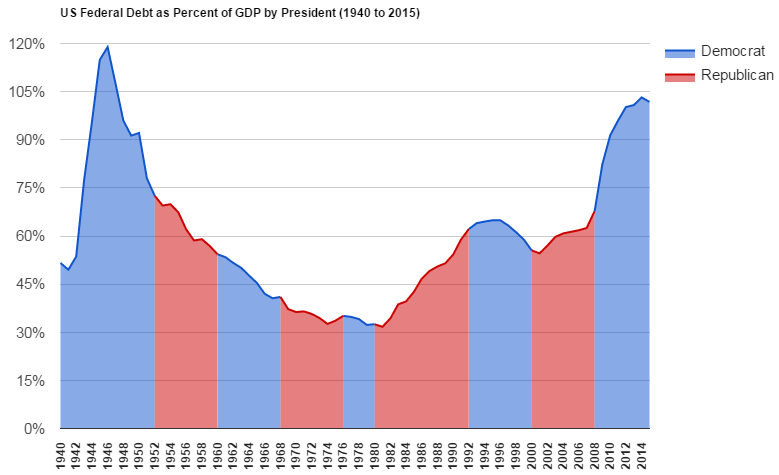 Let me start this post by saying that I’m neither a Democrat nor a Republican.

Both parties have increased our national debt, and both parties are unduly influenced by corporate and banking interests. The chart above tells the story.

If our government was run like a business we would already be shut down.

There are efficiency consultants in the business world who could delve into the government books and identify billions in wasteful spending. The federal budget could be balanced, but this would require massive layoffs in the defense industry, as well as a downsized military.

The United States currently has 662 military bases with active personnel stationed in 80 countries!

Why does the United States have a military base in Honduras?

There should be a color-coded ballot that details the voting history for every politician.

Yellow for the politician running for office for the first time.

Imagine a color-coded ballot based on financial intelligence!

I would vote all GREEN, regardless of party affiliation. If our politicians reduced costs and made government more efficient our taxes would eventually go down.

What if we elected honest, debt-free business owners instead of law school trained bureaucrats who’ve never owned or operated a business?

I’m NOT making a case for Trump. He claims that he’s worth billions, but he might also hold billions in debt. There is a specific reason he hasn’t disclosed all of his financials.

Trump has zero integrity, and he’s in hock up to cotton candy hairline.

It would be great to see successful, debt free business owners with INTEGRITY as the political leaders of our country. There are people like that out there, but the political realm is so nasty and dishonest that good people seem to be weeded out early in the process.

Instead we have a real estate investor (and total bull-shooter) who is known for ripping people off and getting married multiple times… running against a woman who flouted national security rules and refuses to shut down a charity in her name that has raked in millions of (questionable) dollars from foreign powers.

Politicians might think twice before sinking our country further into debt.

That’s my idea for the day. As much as I enjoy writing these posts I’ve got 2 (profitable) ventures to run…