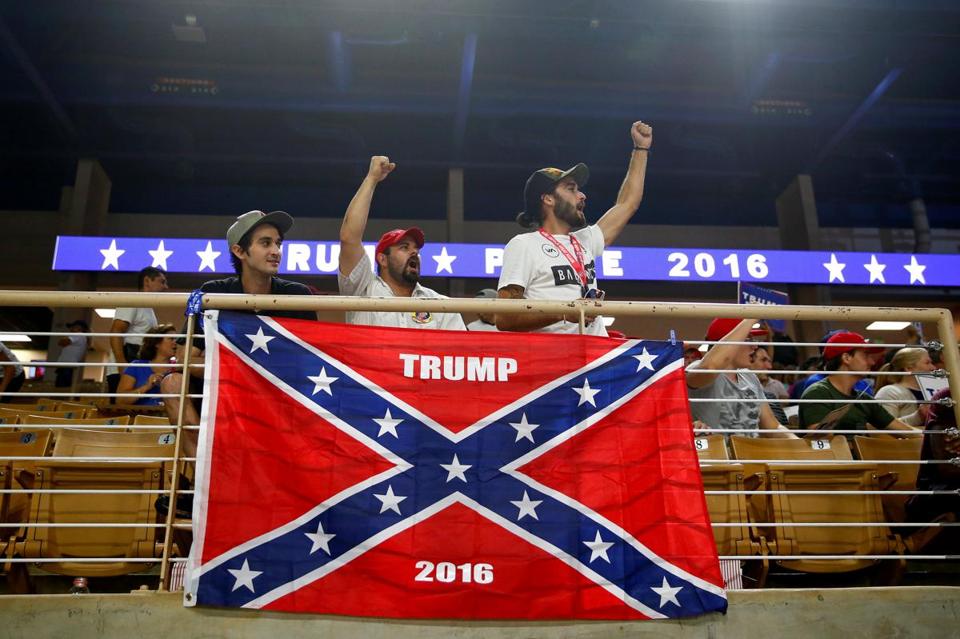 Full Disclosure here: I’m a Caucasian male, my wife is Asian and my daughters are half Caucasian, half Asian.

This disastrous presidential race has brought out and magnified a group of white people that still exist in this country; local yokels who don’t read (or can’t), have never traveled far outside of their home state, and have been emboldened by the Trump campaign to let their confederate flag fly.

I can’t wrap my head around the modern white racist, what do they gain from this viewpoint?

Our world is so interconnected, we all occupy the same space.

If you own any type of business that deals with the wider public you need to seek to understand all people, hating and fearing others can only hurt your success.

Do these folks have a job? Do they only interact exclusively with white people?

The confederate flag is really just a few notches below the Nazi swastika. When I see that flag my mind automatically associates it with cross burnings and lynchings. Some Southerners refer to this flag as a symbol of “Southern Pride”, but what are they proud of? Slavery? Church bombings? The KKK?

At a Clinton rally in Dade City (near my home in Florida) there were a bunch of Trump supporters yelling obscenities and waving a dirty confederate flag. Were they trying to convert the Clinton supporters? Was anyone impressed by this?

The picture above was taken at a Trump rally in Florida earlier this year. These guys apparently had their flag custom made for the occasion, maybe they special ordered it months in advance!

If you harbor outward hate towards another race you probably have something inside yourself that is dark and destructive. At some point we need to take that flag waving racist and house them in a minority community for a month or two. Let them see the good and the bad, let them realize that the object of their hatred has the same human traits that we all share.

Let’s put that racist in a job where they have to answer to a boss who is NOT white.

Perhaps the only real cure for racism is when our great-grandchildren are a combination of all races, when we are all just shades of brown together and the labels of white and black are no longer used to describe people.