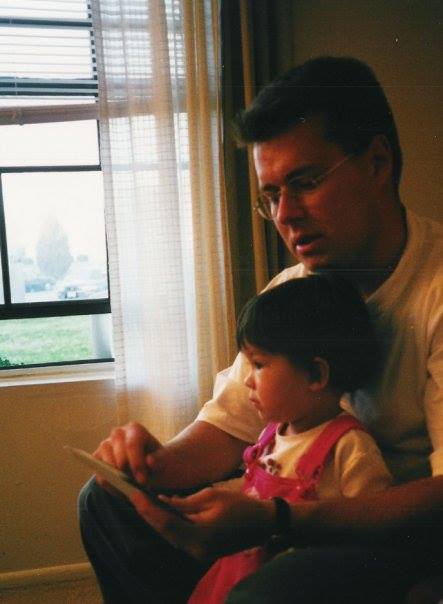 I got up at 4AM (this fine January 1rst) to drive my daughters to Tampa International for a flight to Puerto Rico. Claire has a friend getting married there and was nice enough to take her little sister as her “plus one”.  Claire turns 22 in a few days, Grace just hit the 20 mark. My Christmas gift to my girls was the round trip airfare.

On the drive home I was thinking about how things change as the decades have turned over in MY life and in the world in general.

The beginning of the 90’s found me in tenth grade at Clearview Highschool.

In 1990 the internet was only used by certain scientists and cell phones were only used by wealthy people. Most people had landline phones with rotary dials hanging on their kitchen wall. Microwave ovens were newfangled technology in 1990…. Long distance calls cost over $1 per MINUTE or even higher.

By the first day of 2000 I was a young married guy with a 2 year old daughter (pictured above) and a 3 DAY old newborn! I had only had a cell phone for a little while, and still used paper maps to get to my appointments as an insurance rep for Mutual of Omaha. I lived in a little 2 bedroom apartment with my family…. the internet was still at snail slow dial-up speeds. There was no Facebook or Instagram. In 2000 there were ZERO plug-in electric cars for sale anywhere, and the Prius hybrid technology was brand new.

By 2010 my girls were in elementary school, I was still married, and the owner of Balloon Distractions, a company that had expanded across the country with several hundred performers in multiple time zones. The ABC show Shark Tank had started to become popular, but I could not have predicted that I’d get on the show just three years later!

In 2010 Facebook was only a few years old, the 2nd generation Apple iPhone was becoming common, and the internet had become faster and more widespread. Rooftop solar in the beginning of the 10’s was still pretty rare, and plug-in electric cars were a rarity. People still had landlines in their home in 2010….

So here we are on the first day of the roaring 2020’s. I’m not married (for now), with 2 daughters almost done college. My voice is on the local radio ads for Tampa Bay Solar, and I drove to the airport using kilowatts generated off my roof. There are billions of smartphones out there and the internet is 5G fast, even 3G fast in developing countries. YouTube has become a learning / entertainment resource for most humans, and services like Hulu and Netflix has replaced basic cable. Solar is on one out of 100 rooftops across the United States, and in higher concentrations in communities that my sales team has targeted. Weed and gay marriage have been legalized and more commonplace.

I feel very optimistic about the coming decade. By 2030 plug-in electric cars will outsell gas powered vehicles, last week Volkswagon announced that 50% of their product line will be full electric by 2025. Improved battery tech will surely increase the usable range of full electrics up to 400 or 500 miles, which will be a game changer for most drivers.

By 2030 prices on full electric cars will come down (just as prices went down for used hybrid cars like the Prius). The widespread use of electric cars will accelerate the adoption of rooftop solar. I’ve sold solar to homeowners specifically because they are planning to buy a plug-in electric vehicle.

In my personal life I’d like to still be ALIVE to see the turn of the next decade… but I’ll be 55 years old in 2030, and the actuarial tables predict that some men never reach that age. Of course, there were many people in my family who reached 90, so barring an accident or cancer you never know.

IF I’m still around in 10 years I’d like to spend that decade helping 100,000 homeowners go solar. I also have some solar related business ideas, but I’m also happy to just make a great living selling solar with my team at Tampa Bay Solar.

Of course, there are surprises in every decade. This is what makes life interesting.