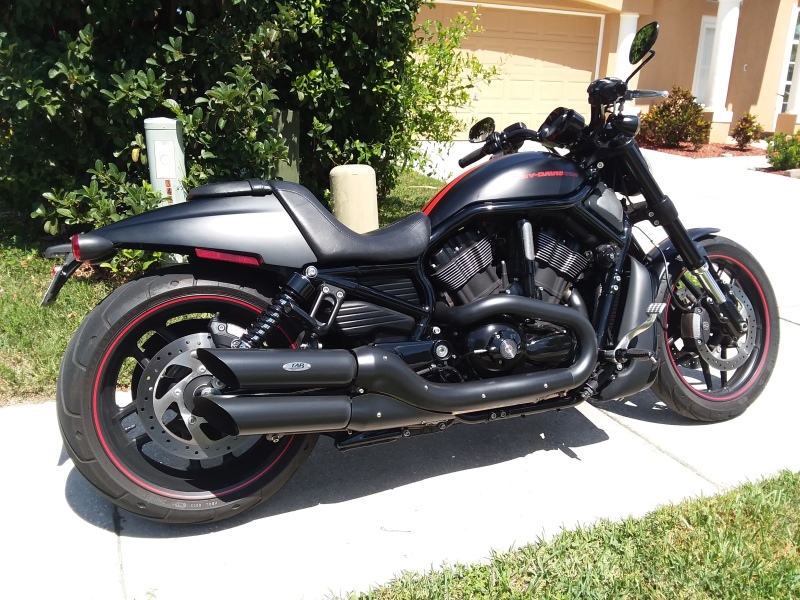 I NEVER thought I’d a get a Harley. In general Harley-Davidson cycles tend to be creaky, air cooled, unreliable pieces of junk…. but THIS bike was engineered by Porsche, in a joint venture with HD back in 2001.

I’ve test driven traditional Harley’s and they rode like John Deere tractors from the 1940’s; Slow off the line, no hydraulic clutch, wildly vibrating engine, all “show” but very little “go”.

The Nightrod is altogether different; Brembo brakes, hydraulic clutch, 124 HP engine… all wrapped in a 670 pound frame that feels as tight as anything German I’ve ever ridden or driven. Before I bought this bike I talked with my (German born) mechanic Reinhardt, he told me the Nightrod is popular in Europe because it can run all day on the autobahn!

When I test drove the Nightrod I was impressed in the first 2 miles, and sold by the end of the test drive. There was nothing wrong with my Vulcan at 650cc’s…. but a 1250cc engine is better, with ample torque all over the rev band, no matter what gear you’re in.

The Vulcan I traded is a great bike for a new rider, but I’ve been on 2 wheels since 1995, and I don’t mind riding a more powerful machine that requires a higher skill level.

BUT…. this bike is a sonic menace from hell. I have to wear earplugs when I take it out. Riding the Nightrod home from the dealership I experienced the same hearing loss as a drunk Motley Crue roadie.

This damn bike rumbles with power.

I feel bad firing it up in my quiet little neighborhood.

I still have my Honda CB1000r, pictured below on the right:

The extra 185 pounds on the Harley actually gives it ample road stability and tracking through a curve, it rides like a lead sled and pulls hard all the way up to about 130 mph, but at that point the aerodynamics start oscillating the front wheel in a manner that does NOT inspire confidence.

Cruisers are not designed for triple digit wind resistance.

Even with the long wheelbase and the high weight the Nightrod still corners nicely.

In contrast the Honda is electronically limited to 145 mph. The engine revs up to 12,000 rpm easily, so the Honda feels lighter but less powerful than the Harley across the gear range.

I could get the Honda reprogrammed to go faster than 145 mph… or I could trade it for a faster crotch rocket?

BTW, I would NEVER go that fast. I’m a law abiding citizen who stays below 55 mph at all times, even when I’m skydiving.

Both cycles have plenty of power, but they feel totally different. It’s always fun to hop from one to the other just to feel a back to back contrast!

Some motorcyclists are “cruiser” guys, some are “crotch rocket” guys… I like being both.